When the first Dutch settlers arrived on Long Island in 1636, there was approximately 13 Indian tribes, or chieftaincies, comprised of several thousand native Americans. They lived in well defined areas and were known for their location. Thus the Merricck derived their name from their word for “bare land” and the Copiague for “place of shelter”.

These Indian tribes, judging from their language and customs, were related to the northern Algonquin rather than to the Iroquois of the Hudson Valley. The Marsapeague -which means “great water land” -took its name from the area of south central Nassau with its abundant fresh water springs. The Indians had friendly dealings with the settlers through the efforts of their chief, Sachem Tackapausha. In 1658, Tackapausha gave the settlers of Oyster Bay a deed to the Marsapeague meadowlands thereby establishing a European presence in what was to become Massapequa Park. the park and museum on Merrick Road in Seaford are named for the Indian chief.

The earliest known house built by a European was occupied by Thomas Freelove Jones at the head of Massapequa Creek near the profitable Indian trail that became Merrick Road. The Jones family prospered and grew, and in 1770 built a mansion-the first in the area- near today’s site of Massapequa High School. By 1780, a number of estates, primarily owned by the descendants of Thomas Jones, stretched along Merrick Road from Amityville to Seaford.

In 1868, the first steam train came along and the Floyd-Jones families had a private station built on their side of the track, just west of Unqua Road. The Southside Railroad also had a station west of Hicksville Road called the South Oyster Bay Station. Woodcastle Hotel was built by Louis Francois Dessart on the site of Front Street firehouse and became a well known summer resort. Descendants of the hotel’s founders still live in the area.

In 1925, the Massapequa Avenue School opened with five classrooms, five teachers and 100 students. It was the third school in the area, preceded by one-room schoolhouses near the Old Grace Church on Merrick Road and another built in 1825 on Wurtemburg Road.

The first new LIRR station to open in 25 years made its debut on the first Sunday morning October 1933. At this time, a major road was being built over the water pipes and conduit that brought water from Long Island reservoirs to New York City. At first, the road was called “Pipeline Boulevard” but was quickly changed to Sunrise Highway. (The extension of Sunrise Highway in Queens is still called Conduit Boulevard.)

A memorable day in the early life of Massapequa Park was May 12th, 1929. This date saw the dedication of Fitzmaurice Flying Field, named after the world famous Colonel James J. Fitzmaurice, pilot of the “Bremen” , the first lighter-than-air ship to reach North America from Europe. A crowd estimated at 100, 000 people visited Massapequa Park that day. Fitzmaurice Field operated without a fatality until it was closed in 1951. Today, it is the site of McKenna and Hawthorne Public Schools.

The construction boom that swept Long Island in the 1950’s and ’60’s brought a new wave of young people to the Massapequas. In 1972, the Sunrise Mall was built, the fifth largest mall on Long Island with, 200,000 square feet of leasable space with a few left open in 1991. 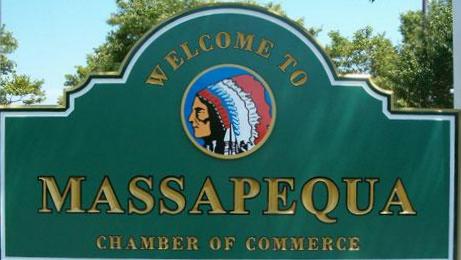